← back to
First Word Records
Get fresh music recommendations delivered to your inbox every Friday.

In Search Of Hope 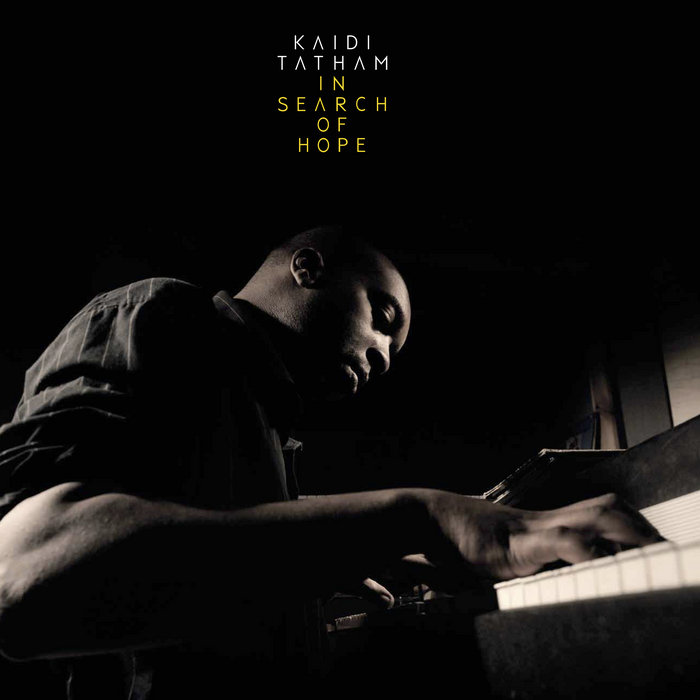 Cosmographer Kaidi is the bomb, man. So brilliant!

His music is HIS, but an approximation would be an insane crossover of jazz rock (some vintage sounds here and there, think Herbie Hancock, maybe some old Jeff Beck sans guitar), Flying Lotus and Squarepusher for the jazzy beat madness, and groovy stylish kings Azymuth. Or something like that.

Just fuckin' killer music to move your body to. This record is HARDER than the mellower and jazz-funkier Hard Times EP. Get both, this guy is the shit. Favorite track: So Amazed.

Johan Dj Krazy Tikkanen This album becomes a listeners choice. I find something new after every spin. More artist should have a relaese like this - A story teller - Favorite track: Do What You Gotta Do.

Peeano Thank you so much for this beautiful reissue, finally in my record collection, Kaidi is magic at all 🎹🎶🥁💯💥🖖

At my IG: www.instagram.com/p/CAtDluqpS-j/ Favorite track: So Amazed.

Maxence Robinet The best album from the best!

From his earlier work with pioneering London production outfits like Bugz In The Attic, DKD, Silhouette Brown, Blakai, Likwid Biskit, Neon Phusion and Agent K, to his recent releases and collaborations with Dego and the extended 2000black family, Kaidi Tatham is one of the most quietly influential British artists of his time.

Born and raised in Redditch, just south of Birmingham, and classically trained from a young age, Tatham made the move down to London in 1993 to study for a BTEC in Performing Arts. It’s here that he met Kester Lydon, a fellow keys player who went on to connect Kaidi to a whole new world of musical minds and ideas. One of the many people he was introduced to was The Herbaliser’s Jake Wherry (The Herbaliser’s 1995 release ‘Blowin’ It’ is also Kaidi’s first performance credit). It was while spending time at Lydon and Wherry’s studios in West London that Kaidi met some of the original members of what went on to become Bugz In The Attic and, in his own words, “The rest is history”. Alex Phountzi remembers; “I met Kaidi when I was 19 years old. We were working on an early track from our Neon Phusion project and Kaidi, who was working in The Herbaliser’s studio next door, came in to check out what we were up to. I think we needed a new bass line on a track we were working on, Kaidi put his hands on a keyboard and started playing something and locked in immediately. We all clicked musically and as friends and at this point, the Bugz In The Attic crew was just taking shape.“ Immersing himself in this newfound creative scene, Kaidi soon went on to make another invaluable connection through fellow Bugz In The Attic member Mark Lipka, better known to some as Mark Force and in certain circles, G Force. Lipka connected Kaidi with Dego, Reinforced Records co-founder and one half of 4Hero. The two formed a musical bond so strong that they continue to collaborate to this day.

2008’s ‘In Search of Hope’ is the second solo album from Tatham and the first under his own name. It pushes the musical boundaries of electronic and dance music in a way that is still rarely heard today. While the album retains its contemporary London influences, it allowed Tatham to stretch out musically in a way he hadn’t done on record before. The majority of the album’s tracks aren’t in the standard 4/4 time signature that most contemporary dance music follows, and some switch between a handful of different time signatures over the course of a few minutes. In a way, the album could be viewed as Tatham’s mission statement and a sign of what was to come from him as an artist: uncompromisingly and unapologetically sophisticated modern black music. His face melting virtuosity never gets in the way of coherent groove, melody, harmony and arrangement. Originally released on Tokyo based label Freedom School and recorded on a modest set up at his flat in south London, ‘In Search of Hope’ has become a holy grail record for dance music fans and jazz heads alike. Its mythical status is spurred on by the fact that it was unavailable digitally, until now, with physical copies fetching astronomical prices online, especially considering how recently it was released compared to other records that reach similar prices.

‘In Search Of Hope’ has had an immeasurable influence on countless musicians, producers and artists that heard it, and Tatham’s work both before and after the LP’s release has blown the minds of listeners from a wide variety of backgrounds. In more recent years Kaidi’s force can be felt further outside his immediate musical realm than ever. His influence and contribution to modern music was epitomised in 2019 with ‘Feed The Cat’’s ‘Orbit’ being sampled on Freddie Gibbs & Madlib’s ‘Bandana’ for the track ‘Flat Tummy Tea’.

In Madlib’s own words, “Kaidi was ahead of his time with that album, and he still is. I love that loop and I’m happy we could use it. Kaidi is my brother, he loves what we do, and we love him.” With no signs of slowing down creatively, Kaidi Tatham continues to push boundaries and blow the minds of old and new fans alike with both his extensive back catalogue and a plethora of new releases on the horizon.

“… In Search of Hope had such a strong impact on me and is such a cohesive musical expression direct to the listener. From start to finish it is always an enjoyable and uplifting experience.” – Kyle Hall

“I've listened to this album countless times and it never fails to stir me. Kaidi Tatham, you are a musical giant, the embodiment of dedication and discovery, play and passion and In Search Of Hope is testament to your compositional and melodic prowess. You are a limitless source of inspiration and excellence. Thank you, for everything.” – K15

“Broken beat wouldn’t have been the same without the multi faceted inspiration and creative wizardry of Kaidi, a key part of an entire musical movement.” – Gilles Peterson

"Birmingham’s very own Herbie Hancock, from rude boy rockers to the most complex in jazz, Kaidi plays it all, he’s a true virtuoso and innovator. His music operates on a deeper, different level. He strikes that rare and perfect balance between fun and playful, whilst technically reaching the highest heights of musicality, the love and passion always shines through." – Alexander Nut

“Kaidi’s mixture of energy and ability inspired all of us and raised the bar of what was possible. He’s probably the most natural musician I have ever come across and whether he is soloing or holding down a bass part he always steals the show.” – Alex Phountzi

“I've known Kaidi Tatham for over 20 years and in that time he has genuinely and consistently amazed me. From his early Bugz days, his legendary live shows at Jazz Re:freshed to his incredible albums, Kaidi has been the next step in the evolution of Black Music. He is my Herbie and Patrice.” – Adam Rock

“The studio, the music and life is just better with Kaidi in it. I always say to people that Kaidi is music on tap, he is constantly connected to the source and brings it down to this planet for the good of all of us. He is constantly challenging himself and the way I see him tackle music is like watching a childlike genius tackle the almost impossible hardest level setting on a video game. He is also one of the greatest teachers through his music and his generosity, openly sharing musical wisdom to anyone who wants to learn. I'm honoured to have worked with him on so many things and even more proud that he is my brother for life! I encourage everyone to listen to his music so you will see why I feel that he is truly one of the greatest of our generation.” – Eric Lau

Special Thanks to Kentaro Kojima (Freedom School) and Errol Anderson